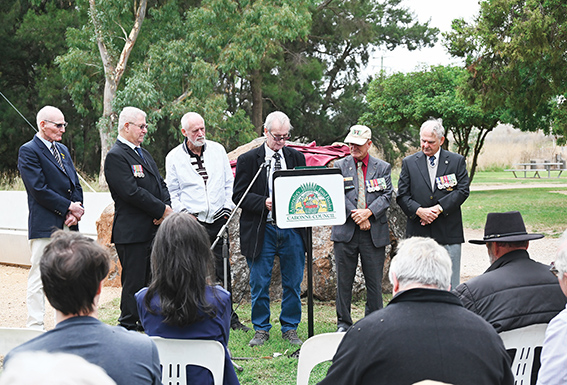 Ninety-five children, almost ten percent of those who were at Fairbridge, later served in the Australian armed forces in both war and peace operations.  Fifty-nine of them served overseas during World War II, the Korean War, the Malayan ‘Emergency’ and the Vietnam War.
Three were killed while in service-Charlie Brown, Mickey Mitchell and Christopher Redfern. Very few farms in Australia have made such a significant contribution to the defence and security of the nation. More than 900 British children were sent to Australia without their parents from 1938-1974 to live and work at Fairbridge.
A warm “welcome to country” was given by Brad Bliss and Elder Aunty Josephine, followed by addresses by Derek Moriarty (President Old Fairbridgians Association), Jamie Jones, Cabonne Deputy Mayor, RSL Representatives and Federal Member for Calare Mr Andrew Gee.

During his address Mr Gee noted:  “My grandmother was a Bernados child and my family knows only too well that the story of child migration to Australia is often one of tragedy, heartbreak, violence, cruelty and an abrogation of state responsibility towards vulnerable children.

But through all of that, there are also stories of personal triumph; stories of how children who came to Australia with absolutely nothing, were sent to places like Fairbridge, and went on to build lives and futures and make an enormous contribution to local communities and to our nation.

A part of this story is how 95 Fairbridge boys went on to serve their country in the armed forces, three of whom made the ultimate sacrifice. This service and sacrifice is part of the Fairbridge story. It is therefore very fitting that the names of those former students appear on this memorial, so that future generations will always remember where they came from and what they did in our country’s name. We must never forget them.”

Be the first to comment on "Fairbridge – another chapter written"