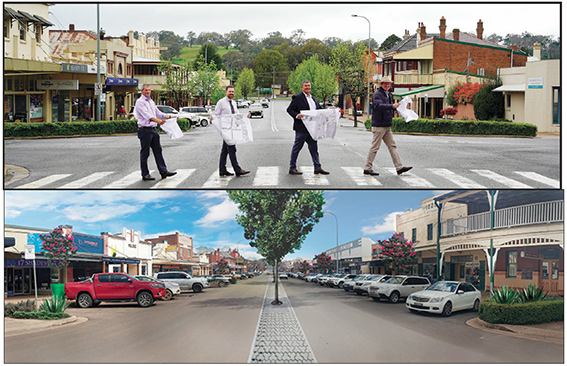 The Australian Government will pour just over one million dollars into Molong’s Bank and Gidley Streets through Round 5 of the Building Better Regions Fund (BBRF).

Thanks to $1,090,425 in funding, street trees will be planted on the centre line of road and in complimentary locations, with solar-powered fairy lights to line the main street. Existing planters and benches will be removed to make way for new seating, and ageing garbage bins will be replaced.

Cabonne Council will oversee the rejuvenation project which aims to enhance the rich heritage of the township of Molong, improve accessibility on the main street, and create more opportunities for local businesses.

Federal Member for Calare and Minister for Veterans’ Affairs and Defence Personnel, Andrew Gee, said the project will build on the character of Molong’s town centre. “It doesn’t take much imagination to picture Molong’s Bank street back in the 1850’s, when many of the heritage buildings were constructed,” said Minister Gee.

“Bursting with charm, Bank Street is a source of pride for locals, and attracts (in Covid-friendlier times) many tourists keen to visit the town and drop-by the many small businesses and cafes which have set up shop.

“That’s why I’m pleased to announce $1,090,425 in funding to further the picture-postcard appeal of the main street.

“While the planting of trees will enhance the streetscape, and help to keep the area cool in the warmer months, the fairy lights will brighten up the evenings, improving safety on the street.

“This project will help drive COVID-19 recovery by encouraging people considering a move to the country to put the town on their list, and by making Molong even more inviting to tourists road tripping around the Central West,” said Mr Gee.

Proposals for Molong’s Bank Street include:
• Creating a median which separates traffic and allows pedestrians to cross and seek safe relief in the centre
• Rids the street of the dreaded double white lines.
• Replaces the current Liquidamba trees at the edges with potted suitable varieties.
• Provides modern and stylish seating and street furniture.
• Proposes a “safe crossing point” halfway up the street.
• Seeks to connect Bank Street to the pool via the laneway to a carpark and the old gasworks site.

(Top) General Manager of Cabonne Council Bradley Byrnes, Deputy-Mayor of Cabonne Jamie Jones, Mayor of Cabonne Kevin Beatty, and Federal Member for Calare Andrew Gee with the plans. [We reckon the Abbey Road takeoff would have been Andrew’s idea] (Above) Proposal for the median strip.

Be the first to comment on "Laughing all the way to the Bank Street!"