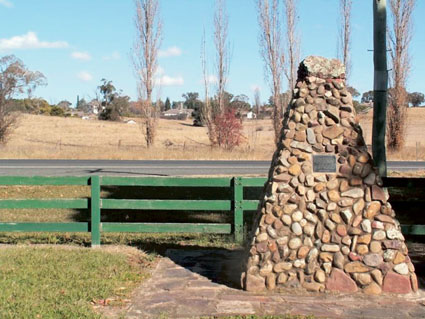 The Old Fairbridgians Association in partnership with its many supporters, plans to mark the legacy of one of Britain’s largest child migration schemes at a site adjacent to the Fairbridge Farm School outside Molong. The proposal incorporates a unique interpretive park and exhibits at the current Fairbridge rest area site on the Mitchell Highway near Molong. The official launch of a public funding appeal will be held in Molong soon (details next week).

From 1938 to 1973 nearly one thousand children made the journey to a new life at the Fairbridge Farm School – the boys to become farmers, the girls domestic workers. The reality of farm life at Fairbridge proved to be very different to the promises made before setting sail from Britain. Much has been written about the hardship, betrayal and limited opportunity available to those under the program. In recent years the Prime Ministers of Australia and Great Britain, along with the Premier of NSW have offered apologies in their respective Parliaments, recognising the suffering of so many under the Fairbridge scheme.

The proposal is to create a place that tells the story from the children’s perspective with the establishment of a park, and highway rest stop near Molong with views to the former Fairbridge Farm. Intended as a visitor attraction and heritage site, the park will be a place of beauty and tranquillity – an antidote to the hardship and isolation of its former residents.

Known to the children as the ‘Creekside Paddock’, it was once a part of the Fairbridge Farm and still provides vistas to several of the village’s significant buildings and its distinct tree canopy on the skyline.

It is large enough to create a range of visitor experiences, has good visual exposure from an extended highway frontage and, in part, rises above the creek floodway – together making the landform ideal for the new purpose.

The southern part of the site already contains a roadside rest area for travellers.

THE PROPOSAL
Essentially, the vision for the project is to convey the human experience of the Fairbridge journey.
Four themes are proposed to record and interpret this journey through life rather than just across the seas – from conflicted beginnings in Britain to lives lived out at, and after, the farm in Australia. These themes will inform the layout, design features and activities of landscape precincts within the Park, following a sequence along a casual, creekside pathway. Importantly, this will be the story of people, told poignantly in the place so formative in their lives. Some of the design elements and ideas to be represented will include:
• Origin: Landmark Structure – British Towns – Social Conditions – Departure Points
• Passage: Time line – Vessels – Migrant Names and Numbers – Belongings – Adventures
• Farm Life: Cottage Homes – Work and Training – Health and Education – Discipline – Play – Loneliness
• Turn Out Personal Identity – Preparedness – Attrition – Determination

There will be a strong narrative implicit in the Park design, however, the aim is to express it subtly through the landscape spaces and plantings, positioning of relevant artefacts and new art installations.
Interpretation of the children’s story will be a central purpose, but achieved through a layered approach – from concise site signage, through cues to electronic audio and video support and referal to associated museum/information resources in Molong, Orange and beyond.

THE BENEFITS
The uniqueness and impact of the Fairbridge Childrens Farm Park, at a high profile location on the Mitchell Highway will be a significant attraction for thousands of travellers who use the highway daily.
The region has no comparable public space that combines landscape design of a high standard with the interpretation of a chapter of significance in the history of the region.
The spaces will hold attraction for multiple audiences – children and families, history buffs and those seeking a quiet space to break their road journey.
The Park will provide both economic and social benefits for the region, and compliment the existing tourism offerings in Molong, which include a modest interpretation of the Fairbridge program at the Molong Historical Museum.