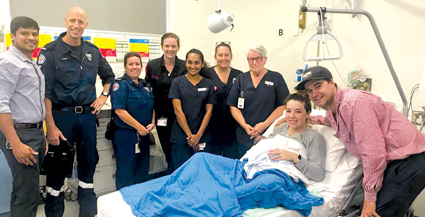 It was a pleasant surprise for the Molong Health Services (hospital) team during change of shift on Thursday 18 April when Ash and Cody Draper pulled up in their car at the front door in an emergency stopover when the young couple from Cundumble (farming area between Molong and Wellington) realised that their baby’s birth was not going to wait any longer – certainly not for the trip to the birthing unit at the Orange Health Services.

Young Clyde Draper timed his entrance into the world to coincide with the 6.45 a.m. changeover of the night shift team to the day shift team at Molong. Whilst Molong has not had a birthing unit for some 33 years – on hand last Thursday morning was former midwife Rosie Blowes who had delivered many a baby at the Molong and District Hospital.

“ Ash has her babies very fast” said proud grandmother, Jennie Brown of Molong. “I said to Ash make sure you and Cody head off to the Orange Health Services as soon as the first contractions start. “They phoned in the early hours of Thursday 18 to say that the baby was coming and they were heading to Orange. Not long after, Ash phoned again and said “we’re not going to make it to Orange – we’re heading to the Molong Hospital”.

“We’d called the ambulance on the way to Molong” said Ash. “But by the time we arrived at the front door – Clyde was coming fast. We barely had enough time to get inside.”

“It was a pleasant surprise for the changeover teams at Molong” said MHS Manager, Deb. Kenna. “Arriving for the day shift at 6.45 a.m. with Shinton Jacob (Nurse Manager) and nursing staff there was just enough time to move Ash into the Emergency Department where Rosie Blowes and the night shift staff were joined by Shinton with baby Clyde well and truly on his way” said Deb. Kenna.

It was a very emotive time for the Drapers and the hospital team with Shinton holding baby Clyde as Ash delivered her new little boy to his Dad, and the overwhelmed MHS team at 6.54 a.m. Joining in the birth were local ambulance officers who were on route to the MHS after receiving a call from Ash. to say “please pick me up at the (MHS) front door and take me to Orange”. Whilst Ash, Cody and new arrival Clyde were then taken by Ambulance to the Orange Health Services – Ash. and her newborn son returned home to Cundumble and the couple’s two boys, Jacob (4) and Fletcher (3) by 5 p.m. – the same day.

“We’ve all settled well” said Ash. “Jacob and Fletcher are ‘smitten’ with their little brother”. Meanwhile baby Clyde – born at 8lb 11oz – is adapting well into the Draper family.

Question is? Who was the last baby born at the Molong and District Hospital Maternity Unit – and in what year? Can you let us know please at the Express or at Molong Health Services (hospital).