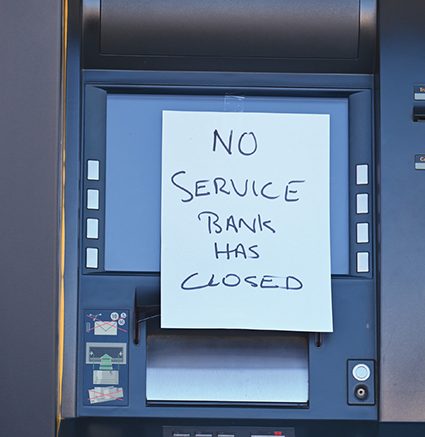 This was the scene at Molong’s ATMs on Saturday – the day after the Commonwealth Bank Closed its doors and ATM. The only other ATM, the Bank St. RediATM went down too.

Below: Emily Gobourg talks to townsfolk about life without a bank branch.

With the recent closure of Molong’s Commonwealth Bank (CBA) branch last Friday afternoon, residents were faced with having to jump cash withdrawal hurdles the following morning, less than a day after the doors were closed for good. Sans signage from the big corporation, the 24-hour ATM attached to the CBA sported a blacked-out screen, which – largely unbeknownst to residents – had also left town the day prior.

The second offsite ATM option for residents – and the only other street-situated machine in the town, the rediATM – had already “eaten” a resident’s card not long after 10am the following Saturday morning, rendering both machines on the main street inoperative.

“That’s my whole livelihood on that card,” said the distressed local, frantically phoning the company from the street.
To the person next-in-line, another local suggested heading to the service station to withdraw money, only to be advised that the ATM there was reportedly out of cash already.

Though there are a few other options in terms of on-premise cash withdrawals in the small town, Molong businesses are still in the “early days” this week, trying to navigate how they’ll keep up with potentially high rates of cash withdrawal on a day-to-day basis.

“It’s hard to say, and it’s really going to be a juggling act at this stage,” management for Spar supermarket stated.

“There could be a chance we’d be able to do early-morning withdrawals – but that would only be if someone has gotten in early, and done a big grocery shop – otherwise, we won’t have the money there to be able to do it.”

“There’s just no way of telling at this stage. The bank closure is going to be a trial period for everyone.” To withdraw money from the supermarket requires a purchase beforehand, albeit, other standalone ATM services – with machines located at The Telegraph Hotel, the RSL, and the Bowling Club, for example – charge average fees of around $2.50 per transaction.

Some of those local businesses (such as licenced venues) will allow cash withdrawals over the bar, but this poses no solution for young workers in the town under the age of 18, or for locals who may not want to enter licenced premises.

Nevertheless, multiply the accumulation of charging non-customer fees each time cash is withdrawn (over the course of say, 12 months), and the out-of-pocket figures start to add-up. The Local Post Office in Molong said they will remain unchanged, continuing with providing feeless cash withdrawals, help with general banking enquiries, and fulfilling cash and cheque deposits (pending you have either a card, or deposit book with a barcode).

The Molong LPO have also reassured residents that they will continue to support those wishing to bank with passbooks, with no changes taking place there.

“A lot of our customers still have passbooks that we update, and we can take money out for them,” the Molong LPO stated.
“We will still do key card withdrawals from accounts, and deposits with cards or passbooks as well.”

This ongoing face-to-face service appeared a strong priority for the people of Molong – particularly for many of the older residents – with locals saying the loss of social interaction will be “sorely missed”, and merely erases another facet of simple connection between people.
“A lot of us ‘oldies’ still don’t understand the technology, so it’s been very saddening to have [the CBA] leave us,” a long-time local stated.

“We like having a chinwag and getting to know our neighbours, it’s something [that] we very much value. The bank leaving us has taken good people with them as well, and they’ll be sorely missed.”

Some local business owners also expressed their thoughts of feeling unsettled with the departure of the CBA branch, regarding feelings of vulnerability with on-site cash; and how small businesses will bear the brunt of lost revenue from locals now having to head into Orange to do their banking.

“What a lot of people don’t realise is that when people head into town, they’re more likely to end up spending money by grabbing lunch there instead, or going shopping,” one local business owner explained. “Small businesses here lose out on business, because the reality is that it’s now at risk of being taken elsewhere.”

Several discussions surrounding the CBA branch closure continue to spark around the town of Molong, with many locals now either considering boycotting CBA, or having already taken their accounts elsewhere. “The ‘bigwigs’ lack social conscience, so why should any of us remain loyal to companies that have just jumped ship on us after years and years of our service,” exclaimed another local.

“The [CBA] doesn’t understand the ripple effect that big moves like this end up taking on small towns, especially in rural communities.”
“It’s a shame we’ve tried to be silenced; because this is a town of people that will always have a voice.”

Be the first to comment on "NO CASH FOR YOU"