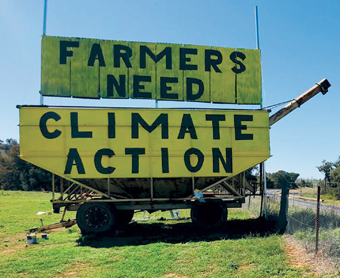 Commuters, truckies and any travellers that are left on the road between Molong and Wellington will have noticed an enormous yellow billboard appear on the highway just north of Larras Lee.

The billboard, which proclaims “FARMERS NEED CLIMATE ACTION”, stands on a ridge near the Bell River Bridge on “Claremont”, a property which has belonged to the Lee family for five generations spanning 190 years.  Robert Lee spent four days converting his old mother bin, affectionately known as “The Yellow Bird”, into the billboard.

He said the project was part of the #ShowOurColours campaign being run by Farmers for Climate Action, an organisation of farmers, agricultural leaders and rural Australians working to ensure that farmers, who are on the frontlines of climate change, are part of its solution.  Mr Lee said farmers were at the cutting edge of climate change because their livelihoods are being affected more than most people. “We contribute to the problem and we can be part of the solution more than most people.”

“Farmers, especially those from western NSW and Queensland, have already done the heavy lifting to help Australia meet its commitments to the rest of the world. We know we can do much more through planting trees and sequestering carbon in our soil, however these things are expensive and not easy to achieve.”  Mr Lee said the farm sector could not do it all.

William Lee who farms “Claremont” with his wife Netta and their two children said: “I have lived here all of my life and during my time I have seen the climate change considerably, and I am only 62. I am convinced that we farmers must take heed of what the scientists are telling us.”  He said already many of the predictions that scientists have made have come to pass, with more erratic and highly-intense rainfall, more frequent longer and more severe droughts, hotter summers and longer fire seasons.

“Even our frosts are more severe.  “We as farmers put science into practice, why do we then reject this climate advice? I have found that once you mentally “cross the divide” and realise that this is an issue that won’t go away, then you have a whole new way of thinking, strategy wise into the future.  “We as farmers need to embrace the change rather than reject it. It won’t all be easy as nothing in farming ever is. Remember we all need to eat, the coronavirus has highlighted that, so let’s get on with it and embrace the change.”