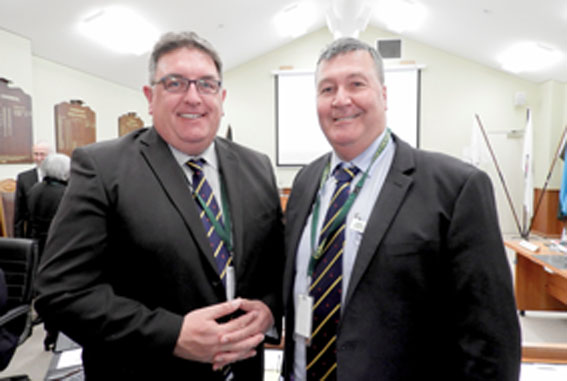 It came down to two names in a box in Tuesday’s long awaited Cabonne Council Mayoral election before the new Mayor was announced.

After both Kevin Beatty and Ian Davison received 6 votes each from the 12 newly elected councillors – GM, Steve Harding announced that both names would be placed in the ballot box and whoever came out first would be declared Mayor. An unusual move – but one approved by local government.

After Steve’s Executive PA, Robyn Little dutifully shook the box – Steve, with eyes averted – reached in taking out one name. It was Kevin Beatty who later described his surprise as “I haven’t won a raffle yet!” A first time Councillor – the retired police professional was not phased by becoming Cabonne’s new leader. Nor by taking on the huge role in his first entry into local government.

Choosing the Deputy Mayor became another long process in what was also a highly contested ballot. Anthony Durkin, a long-time Cabonne Councillor, Canowindra resident and current police professional was elected.

After congratulatory handshakes, kisses, pats on the back were shared between the 12 member Council team – and attending to media interviews – Mayor Kev took ‘the chair’, perfectly relaxed – and conducted a well organised September meeting.